I have made 3 scenes: Armed away, Armed Home and Disarmed. They all work flawlessly and change the arming mode in Smartthings.

I have seen that there is a tile that, when pressed, contains the same functions.

My problem is I can't get this tile to change state.

What am I doing wrong or is this tile not working?

I have several Lutron Caseta ceiling fan switches in my system and I can add them to my panels but there doesn't seem to be any way to set the speed on the fan.  They show up as a switch and I'm able to either turn them on (which sets them to high speed) or turn them off.  I can set differrent speeds in the ST App but not in AT.  Is there a way to add this feature in the future?

SmartThings and Hubitat together

Hi, I have in mind to manage two hubs, a Smartthings and a Hubitat, I want to know if in a single panel it is possible to insert devices managed by different hubs and to do this I need to have some special care. Thank you

Hi, I would like to know if it is possible to link ActionTiles to Alexa. I would like to find an alternative to the SmartThing hub and thought I could use the Amazon hub. Thank you

Anyone found a way to integrate MyQ garage door opener?

Tile is labeled a Placeholder, so it seems to not update

I have a tile based on switchbot humidity level, but it seems to not update.  It is connected to smartthings, and not sure if it is updating smartthings. In the info area on ATiles it says it is a Placeholder.  what is that?

So I recently decided to dive into all of "this" (ie. actiontiles, smartthings etc.) It's sort of hard to keep up since things constantly evolve and when you read older topics sometimes those issues have been resolved etc.  I wanted a "dashboard" or "frontend" to interface with smartthings. I only had a couple of conditions that needed to be met. I wanted to be able to control all/most of my "smart devices", I wanted Alexa integration, and I wanted to be able to control my home security via the panel that I chose. I did a lot of reading and it appeared that smartthings with actiontiles would do all of what I wanted. I purchased a ST hub, a actiontiles license and a Konnected alarm module. I've learned a lot along the way and things have been relatively smooth. But here is where I've hit a roadblock...

It looks like actiontiles doesn't (yet) support the v3 new app where STHM is concerned...and apparently, SHM is no longer an option in the classic app (at least for new accounts...it no longer shows up and can't be added). I've seen some workarounds that sort of make the v3 app work by using some virtual switches and the classic app...but without SHM in the classic app, I don't think that workaround works. So that means the Konnected alarm module I purchased won't work via actiontiles (I have it working in smartthings v3 STHM). Are there any solutions to bring it all together given that I can't add it in the classic app? Any help would be appreciated.

I just bought a robot vacuum cleaner from Samsung ( Samsung Jetbot 80), everything works fine form Smartthings, but when I try to add a start button Tile on ActionTiles; to give a start cleaning command to robot this is not on the list... .  Please find attached Capabilities found on this device, the switch from Attributes probably is just triggering the Auto Mode On/Off and not to start the device.

Can someone give a hand how to make it work native from ActionTiles ? 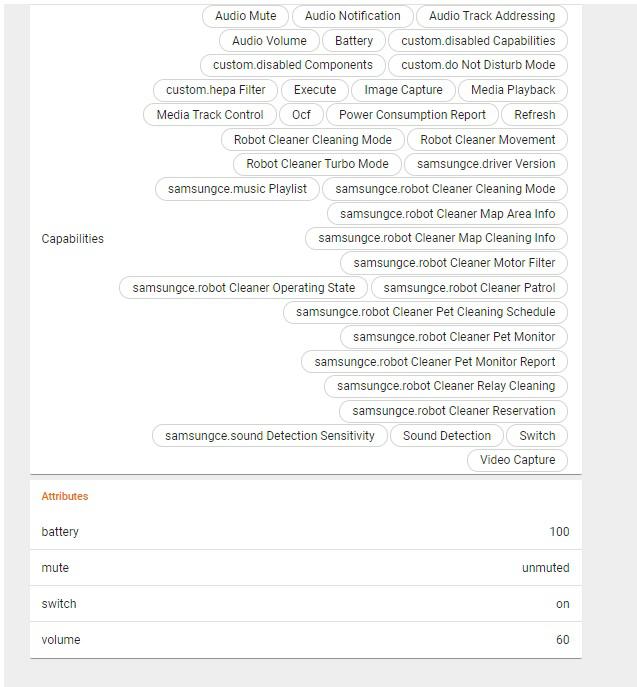 Hi, is there any plans to create a toggle for a fan control that isn't a slider? Right now, as you know, the fans are operated the same way the lights are in that there is a slider that is 0-100%. Whereas a fan works by having a low, medium, high which on mine is associated with 33%, 67% and 99%.

Here is an example of mine on the ST app. 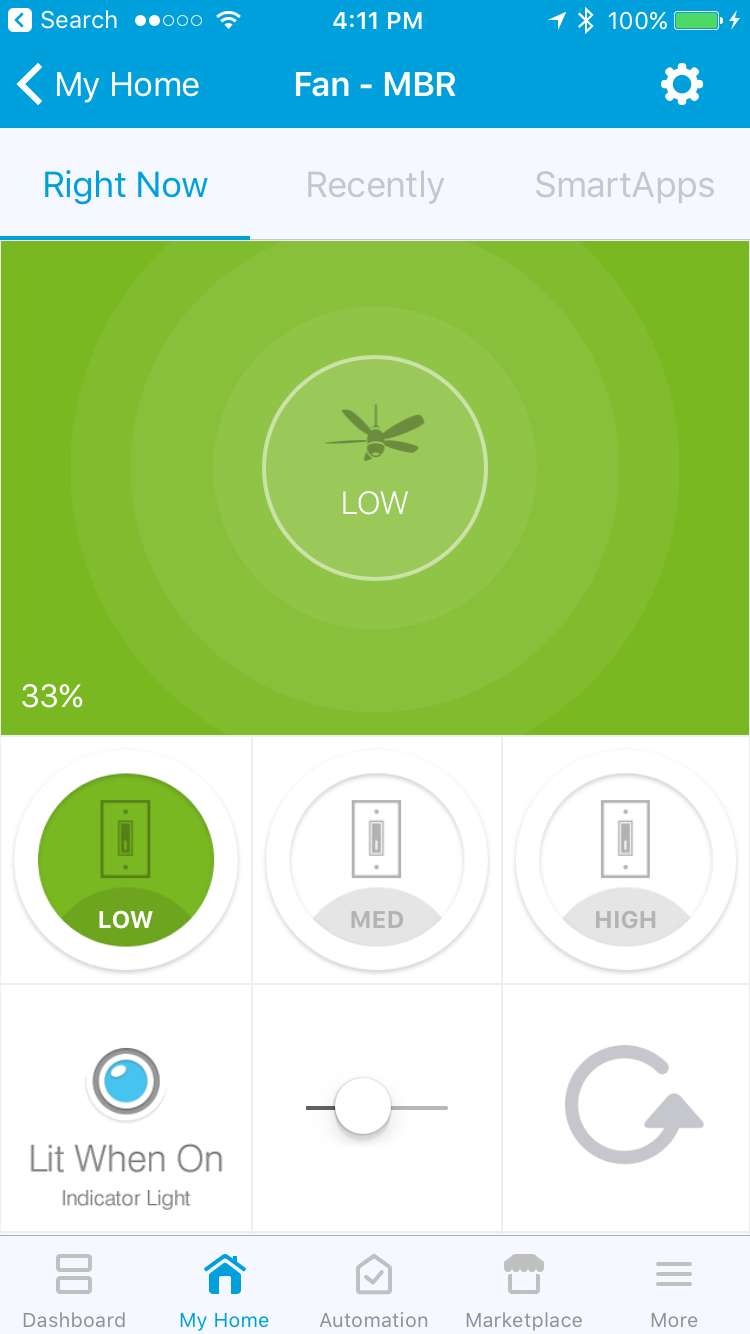 Capability "Fan Speed" is still marked as "proposed", which makes us hesitate to spend effort to implement it, as it might be radically changed:  https://smartthings.developer.samsung.com/docs/api-ref/capabilities.html#Fan-Speed

I'm not sure what steps SmartThings goes through (and how long it takes) for them to move a Capability out of the "proposed" status to something else.

Perhaps it is in the "proposed" status because it is so poorly defined. The speed is supposed to be a NUMBER - and the specs say it is a minimum of 0 (zero), but no maximum. 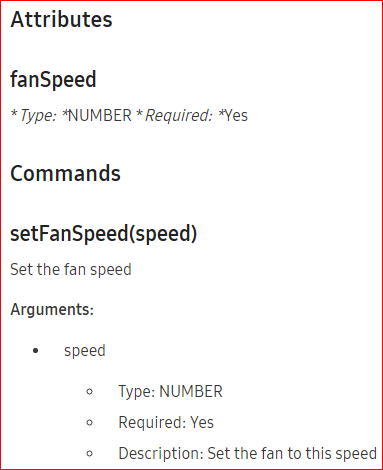 So is speed (NUMBER):

The last possibility is the least likely: Because the proper implementation of an Attribute with enumerated distinct string values is ENUM, as in:  switch(on,off); or fanSpeed(off,low,medium,high,auto).

I just realized I wrote this exact same Answer a year ago. The fact is, the situation has not changed. The only "Fan Speed" Capability that exists, takes an unbounded NUMBER, and there has been no update from SmartThings to define what the number's domain is.

Is of this writing, it appears that Google devices (Cams, Thermostat and the Hello video doorbell) are now officially integrated with SmartThings and does indeed appear in the devices list within the SmartThings App.

Can anyone confirm is all device integrations i.e. Cam, Doorbell and Thermostat are up and running on ActionTiles and if yes, what the experience is like, any limitations?

Specifically, will I be able to see embedded live video feeds within ActionTiles?

How do I add the SmartWeather tile?

I see where I can add individual sensor values of the weather tile (temp, humidity, lux), but how can I add it as a whole in the same way SmartTiles did? I'm sure I'm just missing something here.

Echo Show 10 with AT

Is anyone using AT on an Echo Show 10? If so have you found a way to have AT as the default screen?

I have a license for ActionTiles that I only just did a minimalistic setup of to POC wall mounted tablets as an interface to my smart home. I am writing to officially ask if ActionTiles can be enhanced to support Hubitat.

I would love it if This system could be migrated over to support it, and will happily buy another device license for that system.

Hubitat has created their own specialized web-app which mimics a lot of the functionality of ActionTiles. We're happy to see that product continuing to evolve and attract interest.

Realistically, we have plenty of consumer facing and non-consumer facing SmartThings related development to focus on before we can even consider diversion of resources to a niche platform. SmartThings is our birthplace and it is the platform of all our supportive customers' homes. The Votes on this Topic indicate that the future is open to many possibilities and the door remains open to anything ... eventually.

for some device (virtual temperature sensor for example) I canno't change the backgroud color .....

How can I have the possibility to change the backgroud color?

It's depends on yhe DH?

I am new to ActionTiles, but so far I love it!  However, I have been scratching my head trying to figure out how to setup groups of lights for specific tasks.  I know how to group them for on and off using a routine, but how do I change colors, or adjust colors of the group?  I see how to do this on individual bulbs, or single lights with the 3 dots that appear, but doing each one individually is cumbersome.  An example is I have 6 Hue BR30 color bulbs in our living room.  If I want to dim them or change the color, they have to each one be done manually instead of in the group.

I have the Philips Hue hub (latest version), as well as the latest version of the Samsung SmartThings hub.  I saw something in the forums about a Hue (re)Connect app, but that appears dead now.

Since the new ST app I can't seem to change the "display value" to temperature or Humidity its stuck on motion as the default. I have two of them and want one to do Temp the other to do humidity.

I contacted Zooz and they said they THINK AT can help me with this. Does anyone know if this is possible?

Do I really need a Smart Things Hub? Why can't I use just access my Smart Things account that is already setup with everything I need?

No, you don't need a hub. A hub is only required for locally connected LAN, Z-wave or Zigbee devices.

There's plenty of devices that don't require a hub, such as cloud connected thermostat, WiFi outlets and lights. SmartThings refers to this setup as "Hubless Locations".

When it comes to ActionTiles licensing, each logical SmartThings Location requires a license. This includes Hubless Locations.