Allow for multiple PIN codes to be used on same Panel

Currently the new feature allows for just one pin code. Adding more pin codes will allow the user to assign codes to different members of the family or temp codes to guests without needing to share their own code. Individual PINs would need to be revocable.

Touch ID instead of pin

for secure pins, can we use Touch ID instead of a four digit pin?

I don't believe this is possible. There is no Web API to access Touch ID.

If such API appears, I would be curious to investigate if it could be used for AT.

How do I set a PIN code for just one tile?

The Panel's "PIN" is applied and only activated on a Tile-by-Tile basis. So perhaps you enable it for SHM, Locks, and special Switches like Fireplace. 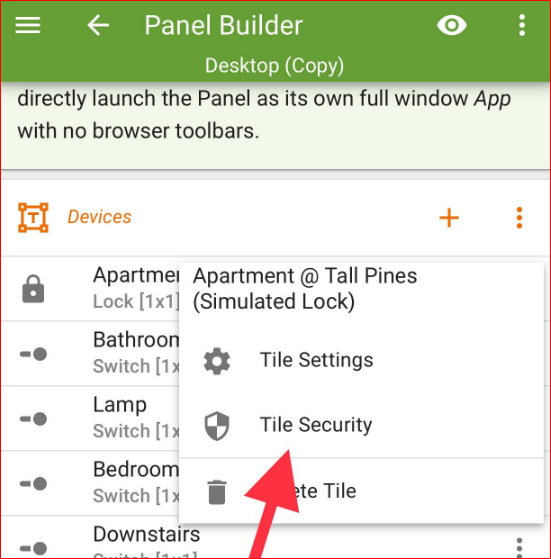 I have ActionTiles with a panic button that will set off the alarm manually.

I would like this to be easy to turn on, but harder to turn off.

I would like this panic button to have no PIN requirement when turning on, but require a pin to turn off.

A scenario plays in my mind...

A bad guy enters the house and I am in it... so I press the panic button in hopes to scare the bad guy off....

but the bad guy sees my ActionTiles -- and I have several of them throughout my house always on so that I can monitor my house from anywhere without having to wake up my devices -- He sees the panic button and presses it and the siren turns off.  Now he can rob me in peace!

This is why I ask for such a feature so that I can set off the alarm easily, but when the bad guy tries to turn it off he will see a PIN screen... he will try to enter something, but will give up.

What are your thoughts on this?

(p.s. I have a Samsung Smart things hub.  I know that I could use a routine to get allow turning on the siren but no way to turn it off.  However, routines don't have the ability to customize the color to Red, nor do they have the ability to show an with an interactive style.  Tapping a routine doesn't change it visually, but a button does and I would like that.)

Has anyone used Safe by Hub6 to make their old wired alarm system Smart and have they found a way to integrate into SmartThings/ActionTiles?

I have a DSC alarm system with 16 zones that I have added the Hub6 to so that I can get remote notifications via the app.  I'd also like to get rid of the old keypad and put into my existing ActionTiles configuration so that I have a more complete consolidation system (with Arlo).

I haven't seen anywhere this is possible, although I've seen IFTTT mentioned, but not sure how.

I have the same issue with my Chamberlain garage door gateways.

I've been reading posts here and on the Smartthings site and I'm having trouble confirming that I can accomplish this type of setup.  I want to be able to use ActionTiles to arm and disarm SHM with a pin pad and a delayed entry and exit.  I'd also like to sign up with either Scout or the new service Noonlight for professional monitoring.

I know that these things can all be done separately with ActionTiles pin pad option and the Smart App SHM Delay V2.  I just don't know if they can all be combined together to replicate our current ADT monitored panel.

I'm not looking for step by step, I'm just trying to confirm that it's currently possible and if people are happy with this type of setup.

In short; SmartThings + ActionTiles + a reputable monitor is a good solution. Hopefully over time, though, we'll all get better at matching and exceeding the features of traditional dedicated systems, like ADT.

There are actually many benefits (other than just cost savings...) to using SmartThings, etc., that help make up for the current drawbacks. There is a lot of current flexibility. You can even add on SimpliSafe or Ring and unofficially hook them up together, to enhance reliability and give you more options than just Scout, Noonlight, or other integrations.

Allow multiple pins on a tile. This will allow implementing different levels of control

AppWorx_Bill 3 years ago in Security • 0
Vote

I have my main panel for SHM. I have a virtual switch tile to arm my alarm with a delay through CoRE and the pin protected SHM tile to disarm and a panel shortcut tile to all my devices. I also disabled the Panel Options on this panel with the thought of having this panel as a "kiosk". Are there any plans to pin protect the panel shortcuts also so no one can access my devices or panel options by going into that panel?

I would love to be able to set a password on short cuts rather then doing each individual tile. (Eg. All the security objects on tile then have a shortcut on the main tile with a lock on it to the security tile.

Sound an alarm for an event?

is it possible to have Action Tiles sound and alarm for a certain event?

(e.g) a monitored Exit is open so the Action Tile could flash using the new icon features, but could it be possible to add a sound file/alarm sound too?

..and maybe when the state returns to normal (Exit is closed) for all icons and sounds return to normal?

Embedded Video credentials blocked by Chrome: What's the risk to not using a username/password?

So after tooling around for a while trying to figure out why my Media Tiles (Wyze Cams) no longer worked and eventually discovered that I could get it to work by logging in directly to the URL via browser then it would work in Action Tiles in that same browser but not being able to do it in the Action Tiles app because you can't just enter a URL directly into it and getting 95% of the way through opening a support ticket and then finding this handy Knowledge Based article https://support.actiontiles.com/knowledge-bases/8/articles/5508-media-tile-broken-due-to-url-with-userpasswordaddress-embedded-credentials explaining that Chrome, Android Webview (including Fully and ActionTiles android apps), and most Firefox browsers are now blocking embedded credentials.  I get it, not ActionTiles fault, nothing they can do about it.  Moving on...

However, now I'm a little worried....what risk am I exposing myself too?   I'm a programmer by trade, but I'm not all that privy on internet security.  My my understanding is that the Tiny Cam web server that's running on my Kindle is on my local network and traffic to it is blocked in my routers firewall.  With out setting up port forwarding and explicitly allowing a connection from the outside world into my LAN, I really shouldn't have any concerns.  Is that correct?  I have no intention on opening up ports on my router as I have no need for remote access into Tiny Cam, I can just view the cameras in my Wyze app.  So am I safe?

Can the PIN Protect option likely to be added to the floating Panel overflow Options menu button?

Unless this is trivial to implement, we think the current workaround below is sufficient:

Is there a way to lock (pin/password) the Panel. ie so that people can not go into the settings? or has to type a pin when pressing the 3 dots in the circle?

This is a great feature and I have been experimenting with it. I noticed there is no security option for a thermostat tile though. Is this intentional? All apologies if this has been addressed elsewhere, I could not find it.

I have a nifty bluetooth numeric keypad which I've attached to my tablet. The idea is to use it as an external keypad to open a lock (have an August lock without keypad), with the tablet sitting inside.However it appears that even though the keypad pairs nicely and works on other web pages and apps, the AT pin-screen does not process keypad input. I've tried on a PC as well. One has to use the mouse to click on the onscreen pin keypad.

NB: This should not show the touch effect (the quick shade-over grey shadow, which briefly passes over the pin buttons when pressed on-screen), because that would reveal the PIN to any observer, of course.

The Forgot Password link (sent via email after requesting it on the ActionTiles login page) just takes Customer back to the Login Page, rather than to a page to on which the Customer can set their password.

PIN Protected Tiles are useful, and sometimes bring up multiple options like (Alarm > Armed (away), Armed (home), Disarmed). But when PIN protecting a Routine tile, like "I'm Back!" we get a banner for "PIN accepted" on top and another on the bottom that says "I'm Back! with a "RUN ROUTINE" icon. 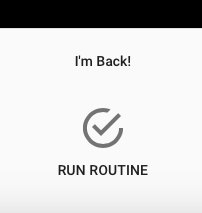 We've already told ActionTiles once we want to run the routine (by pressing on the tile), and then had 4 more touches for the PIN.

Would you consider an option (or default behavior) to simply run the routine at this point, rather than require a 6th touch by pressing "RUN ROUTINE"? (Which, doesn't actually look like a button, because it's not a highlighted mode, perhaps thanks to Material Design?)

I'm worried this will be a non-obvious last step to turn off our alarm for PIN users entering the house, since we've already gotten a message that the PIN was accepted and we can dismiss the dialog (with the X) without actually turning off the alarm.

Option to require PIN entry for Disarming system only (no PIN for arming...)

Current pinpad feature requires using pinpad authentication for both arming and disarming. Allow the option to use pinpad for disarming only.

I run a local NVR (network video recorder), specifically Unifi Video, to record/manage several security cameras.  I have set the action tiles to grab periodic jpeg image (1 per second) from the local server.  However, I have noticed a significant amount of traffic being generated on my wifi network due to action tiles (way more than what I would expect by just updating SmartThings or pulling a single jpeg that is on the active screen).  It appears that ActionTiles is actually uploading the jpeg files to some internet based location. The reason I have a local NVR is that I don't want the images uploaded to the cloud, but ActionTiles appears to do just that. How can I disable this?

I copied a panel that had a PIN set up on it.  I then applied the PIN security to a switch on the new panel.  From multiple devices, the PIN pad popped up, but it gave a timeout error after about 30 seconds (Error: request timed out) and never did anything to the switch.  I went into the panel settings of the new panel and entered the PIN again, and then things worked properly.  I have replicated this twice.

BTW, I love the PIN option.  Thanks for implementing!